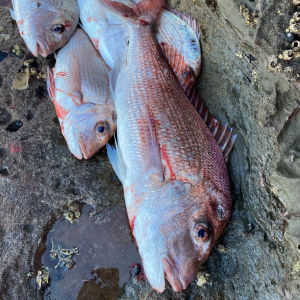 Hey Folks. It looks like the winter change is upon us, reports from around the Whangarei harbour would tell that the fishing has slowed dramatically in the last week, while this sounds dyer it’s not as drastic as it seems. Temperatures from inside the harbour over the last week have dropped from mid-18’s to mid-15’s and the bite has also reduced shrivelled with it. A Trip inside the harbour at the top of the high tide on Monday had 4 very good fish hooked in the first hour before the tide picked up. Weed seemed to be an issue I’m guessing from the big swells we have been getting stirring thigs up. Parua bay through Mclouds bank is still showing good sign with snapper, Kahawai, Trevally and Kingfish all seemingly p resent but hard to get. The good news however is that for those lucky enough to make it out the front on Monday and Tuesday the bite has been hot. From 15m out to behind 3 mile reef a gourmet selection of fish can be found, snapper going to 20lb, kingfish, snapper, trevally and some very tasty gurnard have been filling bins. Bait, Soft baits and Sliders all doing the damage.

Due to large swell and onshore winds no boats went out on east coast last week from here. A few went out yesterday 26 May as swell dropped for half a day. Good snapper takes inside the Hen and Chicks, fat gurnard also caught. Quite a few headed to the Kaipara and fishing was solid, with limits of pannies caught on sliders and mullet bait at graveyard and in harbour estuaries. Mangawhai Bar starts to improve this Friday, and fingers crossed that weather will behave over Queens birthday weekend. Local fisho’s and weekend warriors have major withdrawals up here.!!

Another awesome week of fishing so far with a variety of species being caught in the gulf, from snapper and gurnard being caught in less than 10m of water to kingfish in 25m plus. With winter on its way the gurnard are slowly creeping in on both coasts being caught on a variety of rigs, soft baits, sliders, micro jigs, and the ‘ol flasher rigs. This week has seen a fast change with inshore fishing with a lot of anchovy schools being herded up in the shallows by kahawai and kingfish, with snapper feeding on the leftovers, places like Orere point, Scullys reef, and kauri point  have all been fishing well especially with soft baits and micro jigs Producing some good eating fish which we have noticed the fillets have been real fat lately. With winter approaching fast snapper are coming in and feeding hard, getting ready for the colder weather, this is when big stray line missions become more effective, pumping big berley trails and chum trails, and big baits have done the damage the last few winters, using the same method we also found worked well for targeting kingfish in the shallower water.

The fishing has been awesome again this week, whether you fish the East coast or the West coast. Beach, rocks or boat, the fish have been hungry and ready to jump on anything we threw at them. Chris fished out over the Manukau bar last Friday, dropping anchor at the 60m mark and deploying big baits down on the Tasman Tackle 8/0 flasher rigs and were rewarded with a fish every drop! It took longer to get the baits to the bottom than it took to hook up to a fish. Chris managed a beautiful 17kg Kingfish on a fillet of mullet on the Tasman Tackle flasher rig, biggest fish I have seen landed on a flasher rig for a long long time and managing to land it amongst all the toothy critters that live amongst the murky waters off the Manukau. Softbaiting has been a proven producer this week also, with the shallows around Auckland holding some solid fish! Smaller natural color soft baits seem to be attracting the bite, nice light jig heads have been the go to with a nice sink rate triggering the bigger fish to bite. Takapuna beach is holding some really nice pan sized Snapper and bigger Kahawai, fishing dawn and dusk has been producing the best results with Anchovies for bait have been catching the better fish.

The water temperature has dropped to about 16 degrees in Whangaparaoa bay but there’s still been some exciting fishing in deeper water around Flat Rock and out in the middle of the Gulf, particularly under the working birds about 5 miles east of Takatu point. Look for diving gannets and pods of dolphins as these are the prime indicator that below, big snapper and kingfish are feeding on the schools of pilchards that arrive into the gulf this time each year. Just about any bait, jig or softbait works in these situations, but a good tip for landing bigger fish is to maximise the profile of whatever your sending to the bottom. Make your baits / jigs / soft baits BIG!

The locals are still cracking into the fish land based with some more great catches of fish to 75cm coming out of army bay and the surrounding coast. The northern facing beaches are still fishing well at night, especially on the incoming tide. Unweighted baits floated into a berley from the rocks or lightly weighted ledgers from the beach seem to be the favoured rigs of recent. Pilchards and cut mullet or trevally baits have been proving most effective. Further up the coast, Hatfield’s reef, Waiwera, Wenderholm, Brazier rock and Mahurangi harbour entrance have all been fishing consistently for snapper and gurnard over the sand. A lot of fishermen reporting a healthy average size of 40cm for both species.

Squid fishing has seen a spike in popularity in the past few weeks with good numbers coming from the rocks along the coast. Fishing anywhere with a bit of weed cover always holds the potential for squid. Jig size 2.0 and 2.5 are still the preferred size as the squid are still predominantly <400g, but as with every season the start of the year often produces a lot of small squid with the odd 1kg fish still buzzing around from last year. They will only be getting bigger and have a rapid growth rate so it’s all good news for those waiting to give it a go!

Specials this week are free TT mono with any bait runner purchase, 15% off all Inchiku’s jigs.

If your not too concerned about getting a bit damp this weekend then Saturday and Sunday morning are definitely fishable . The wind is offshore and does get fairly heavy later in the weekend so it might pay to tuck in reasonable close.

The inshore fishing is still very good with the same areas producing as last week, 30 meters of water mid way down Ruapuke Beach and 15-30 metres of water off Carters Gap. There are real nice Snapper coming from these depths but make sure you give it a bit of time, don’t leave the area too soon if you are catching smaller fish and a few undesirables as the better fish will show up. The Gurnard and Kahawai are also in good numbers and a few Spiny Dogs are starting to turn up now however not in great numbers as yet fortunately.

There are still a couple of crews targeting crays out on Jacksons Reef and doing reasonably well with their pots, definitely an option for the weekend. The visibility will be not so great with the amount of rain to come through so the pots will probably be a better chance than a dive.

The offshore fishing last weekend out at the trench was pretty damn good and a bunch of boats from Kawhia, Raglan and New Plymouth made the effort. There was a bunch of Bluenose taken along with some nice Puka. The crew of Rob and Windy on Island Time had a slammer of a trip, loaded the bin with Bluenose during the day and then shot out a bit wider and had a nice sword in the boot by 9pm. That’s an Epic trip.

That’s it from me this week, I’m off to Carters Beach to soak some baits and will let you know how it is next week.

Well with the harbour cooling down every day now the snapper are on the move, but we still hearing some nice reports of fish being caught around the flats with the mornings and mullet for bait working the best! Plus the bait (mullet, piper) is still around so the Kings are there too with some surface bust ups in the mornings! livies or dead piper will fool them for you to get a bite

Outside seems to be a little hit and miss but those fishing over the sand around Matakana/Karewa  in that 15-20mtr are still getting  some  nice fish for the bin .The Papamoa sand banks are still producing fish with most finding fish in small holes  so having a good scout around first before will help! and further down the reports of the foul off  Pukehina  is holding fish with soft baiting working for most boats the Zman baits motor oil and bruised banana the pick

Stray lining up and around Motiti is still producing some solid fish with plenty of berley and good quality bait (those bullet tuna are working )should get you some action the Tarakihi fishing has started to fire up a bit as well with good fish in the 40-60 metres  around the outer reefs ,shouldn’t be too long before they venture in closer

Out at Mayor the Kingi fishing is good if you are willing to brave a bit of swell with live baiting the best method ,one of the staff has had some great fish in that 15-20kg bracket and noticed  that there is plenty of bait out there so it’s looking like it will be a good winter Kingi season plus don’t forget to take your jigs as they will been very keen on them too! at the moment those 300-400g pink or orange jigs fishing the best

And just a reminder to all those fisho’s that the blue fin tuna won’t be too far away so it’s a good time to get things sorted respool, re-rig, etc!

The weekend just gone the swells were still big, so I headed further down the coast where it was a bit more sheltered and filled up the chilly bin with some nice size fish. This is the time of year to start planning trips up and down the coast. Now that the weather and sea are getting colder the snapper are getting a little illusive locally.  Gurnards are starting to move in closer, that’s when you should change your baits to oily pilchard cubes and small hooks.  Night-time and early morning change of light seem to be the most productive. During the day, some nice size Kingi have started to cruise along the beach and live bait’s small kahawai out there will give you a good chance at hooking up. Get the long rods out for the long weekend and come in and see as for your bait and we will help you out.

Back To News Archive