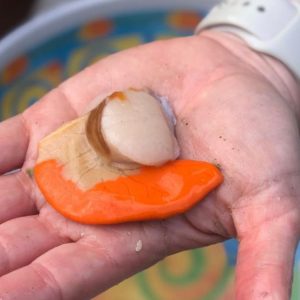 There is some amazing fishing to be had in Northland this time of year, with big fat moocher Snapper hanging around virtually everywhere! We fished out over the sand Saturday with big Soft baits and light jig heads, with variable winds we were able to get away with ¼ oz jigheads and 7” soft baits. Casting out over the sand produced lovely fish up to 8kgs with a solid feed of fat Snapper, Kahawai and Trevally. Target early morning, long drifts and change up your colours until you find a colour that’s working. We found great success with Bruised Banana and Pink Shine.

Finally since lockdown started, the Mangawhai bar was safe to cross and fishos were stoked! The winter weather windows are tight, and on Saturday the wind light and swell down. Large numbers embraced the opportunity. The positive upside of having no fishing around the area from lockdown and 3 weeks of swell is everyone got great catches. Mainly snapper, lots of fat kahawai and some solid gurnard. Did not seem to matter what you put down the fish were on, bait, sliders and softies. There has been some big bird bust ups out wider of Bream Bay also, with an absolute cocktail of fish sitting under them. Also land based action has been hot off the bricks down Te Arai, off the beaches and for those in the know. The swell has meant plenty of food in close.

Fishing has been excellent out wide when the weather permits, fishing lures in 40mt plus behind Waiheke and over to Coromandel has seen most people bin up in no time at all, with some really solid fish being caught amongst a lot of very fat pannies  the Orange lumo Coin-drop and candy apple sliders have been the most effective but most lures have produced good fish. Fishing inshore has been a little hit or miss lately but with a bit of patients and a good berley trail there are some good fish to be caught, as the water gets colder the fish feed less actively and you will often be able to find them on the sounder but not get a bite. Pumping a big berley trail can get the lethargic snapper to feed more aggressively. Again this week there have been a lot of reports of good sized gurnard being caught in the firth and on the Clevedon flats, fishing flasher rigs with a jitterbug on the bottom is a excellent way of catching gurnard while still catching snapper, gurnard tend to feed on the bottom and slowly dragging lures on the bottom often produces plenty of these tasty little fullas

There have been quite a few people squid fishing around kawakawa bay and Orere this last week with mixed results, but at this time of year if you can find an area that’s nice and calm and has plenty of Kelp you shouldnt have much of an issue catching a few for tea.

Fish are sitting in good numbers, with lots being caught between Beachlands and Waiheke averaging 40 – 45cm and fat as in great eating condition. We have found great fishing in 6-8 metres of water and out to the noises on an incoming tide, deploying a big berley and straylining back whole pilchards lightly weighted has been the go recently. Wide variety of Sliders and Kaburas in orange and Pink are working well around shag rock at the bottom end of Waiheke in the deeper water, producing some lovely fat fish!

We’ve had our fair share of wind and rain lately which can make it difficult to get out in the boat. Especially in a small boat! When the weather windows have allowed there have been some good catches from the 50m area east of Flat Rock and likewise from around Little Barrier and Channel Island as you’d expect for this time of year. The pilchards are still streaming into the gulf so expect the good offshore fishing to stick around right through to spring! Its looking like another weekend of bad weather; never fear though as we are very lucky to have some great land based fishing right on our doorstep. We have the shelter of the Whangaparaoa Peninsula so there is always somewhere to have the wind at your back. Recently the rock fishing has improved a great deal as the fish have been in closer feeding on the large anchovy schools and shellfish as they tried to put on condition for the cooler months. Try fishing the low light conditions of dawn and dusk (and even into the dark) as these are primary and instinctive feeding times for our inshore species. Using oily, tough baits like mullet, bonito and salted pilchards is another thing to try to avoid the “pickers” stealing your baits. Beach fishing on a rising tide in the evening can be very productive if you don’t mind putting in the effort and wrapping up warm. If you forget your raincoat or just want another layer to chuck on before you go, we have a huge range of super warm TopCatch winter clothing in store. Everything from fleece trousers to heavy seam sealed waterproof jacket. All TopCatch clothing less 20% this week.

North of Rangi lighthouse and around the corner towards gardeners gap seems to be the hotspot at the moment. Rather convenient also as we had strong sou easterlies and this area being relatively sheltered with this wind direction and leaving you able to anchor up and run a big berley trail. Lots of 40-50cm Snapper caught, all in amazing condition! We even had 2 customers getting some lovely John Dory of noteworthy size. Making the trip to head a bit further out when weather permitted saw a few people make it over to the Coromandel from here, also with great success just north of the Happy Jacks. Slightly better size Snapper with fat fish up to 55-60cm were caught and a beautiful  Kingfish on a lovely piece of squid of all things. Lastly its peak Squidding time at the moment, we have seen some awesome catches off of Tamaki Drive lately, with Squid not being to fickle on jig sizing and color. So find some calm, clear kelpy water and get after it team.

Good to see this season just keeps on giving, other than the weather and a bit of a temperature drop the fishing is still very good.

The last couple of weeks has seen some very good fishing up off Carters beach however this last week has seen some good action a bit further South. Just off the back of the mountain in 15 metres of water has produced some quality Snapper easily into double figures. The numbers haven’t been as good as you would expect in Spring but the quality and size has definitely made up for it, just be a bit more patient and get a good berley trail going. Another area that fished extremely well last week was in 30 metres of water down on the Southern end of Ruapuke Beach. There was some very clean fishing down this end with nice Snapper, Gurnard and a smattering of Kahawai. Fortunately the Spiney Dogs haven’t made much of an impact as yet but no doubt that will change soon. If you can’t be bothered heading outside then there are plenty of Flounder up in the Harbor at present, grab yourself a net and head up at low tide for a look around. Spearing down on the flats is another great option but with this week’s full moon the water visibility will likely be an issue.

Well with the water cooling down every day now, the fishing has been a little ON or OFF. But most anglers are still getting some really nice fish for the bin and being rewarded for putting in the effort and braving some cold mornings. It’s a real mix bag this time of year with Snapper, Kahawai, Terakihi and even those tasty John Dory on the menu! Some HOT SPOTS lately have been the foul off Karewa and Motiti in that 20-25 meters, this has been holding some nice fish with big bait and berley missions and lures producing some awesome fish. The outer reefs like the Lab, Penguins and Tahua have some good amounts of life around and hearing some nice reports of some solid kingies on livies been landed most in that 12-18kg range! The deep water species are starting to fire up too with Bluenose and Gemfish in reasonable numbers out and around Mayor Island so pick the weather and get out there! Crucial at this time of year is a lot of focus on what, where and when those Bluefin will turn up! Soo it is a good time get everything sorted (lures, respool, etc) so when it happens  you can get out straight away and nail these awesome fish!

The weekends fishing in the BOP along Papamoa beach early morning on Saturday gone saw a few nice snapper with biggest being 46cm. From then on the weather turned to custard so the keen fishers headed to the river mouths to catch KY’s. It was pretty Tough fishing over the weekend along the beach with 5m swells pumping.

Back To News Archive